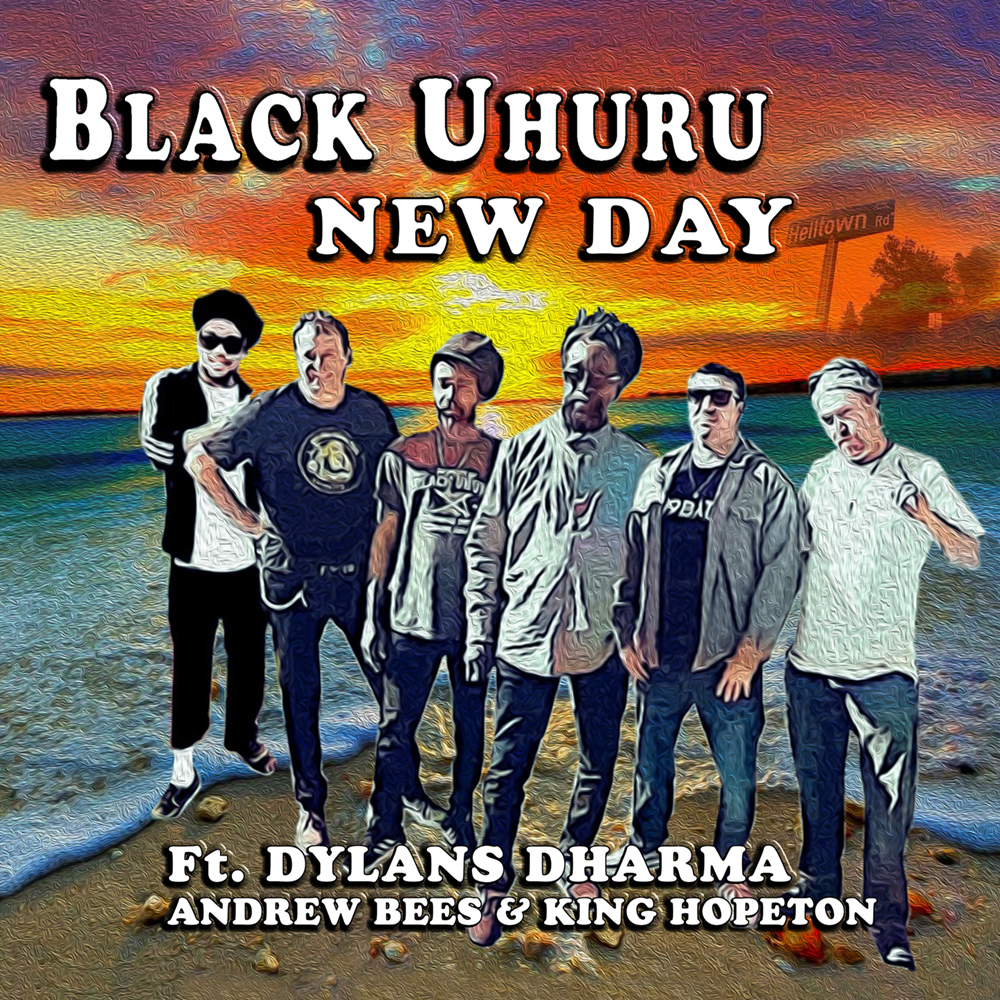 To celebrate their 50th-anniversary, the legendary godfathers of reggae Black Uhuru, along with Chico Roots-Rock crew Dylans Dharma, are partnering with SoCal independent label LAW Records to announce the release of their latest album New Day (to be released May 13, 2022).

One of the most prolific Jamaican reggae bands in history, Black Uhuru has earned an impressive collection of music industry accolades over the years including winning the first-ever Grammy Award for reggae music with eight other Grammy Nominations to boot. Their enduring success, along with having the highest reggae record sales after Bob Marley and the most songs in the genre sampled by other artists, has mad the name Black Uhuru synonymous with the reggae genre as a whole. The upcoming New Day LP carries on Black Uhuru's powerful legacy of conscious roots reggae that started in Kingston, Jamaica, and has now continued around the planet to influence new generations of emerging reggae artists for five decades!

“The band is legendary,” says Black Uhuru founder & bandleader Derrick “Duckie” Simpson. “We’ve been around for over 50 years.  We started when we were youth and the band has come right through all these years in abundance.. There have been a couple of changes over the years with some guys left to do other things, and a couple of lead singers passed through the band: Don Carlos, Michael Rose, Junior Reid, and then Don Carlos again, and Andrew Bees now for like 25 years.  This album is my second up front doing lead vocals.”

“Celebrating 50 Years of Black Uhuru” will kick off with Black Uhuru’s release of the new single “Brand New Day'' (dropping  March 18, 2022) along with the full album pre-order also starting on March 18, 2022. Featuring the band’s iconic founder Duckie Simpson — back out front with his earthy, soulful baritone, trading verses with Dylan Seid of Chico-based Roots-Rock crew Dylans Dharma — the track is a rewrite of a Dylans Dharma song by the same name, with new verses by Duckie that were inspired by events he encountered during his time living in California in 2019.

After an extensive cross-country US tour, Duckie had retreated to Helltown, a rugged mountain community in the hills of Butte County in Northern California. What he found there was sheer devastation after the deadliest and most destructive wildfire in California's history (known as The Camp Fire) had just ravaged the entire area. Duckie was deeply inspired as he witnessed the small community come together with love and positive energy to regenerate and rebuild what was lost. With this deep respect and appreciation, Duckie collaborated with Dylan Seid to musically paint the ties that bind in that unique mountainside community.

The “Brand New Day” single is the second Black Uhuru collaboration with Dylans Dharma following last November’s single “From Jamaica to Here”, an unexpectedly groove-inducing cover of a 1976 folk song by English singer-songwriter Ralph McTell entitled “Clare To Here”.
The new album will also feature collaborations with long-time Black Uhuru frontman and solo artist in his own right Andrew Bees as well as a cover by CA-based singer-songwriter Baharat Karmakar, whose song "I Can See the Light" about The Campfire, inspired the New Day project.

The New Day album captures Black Uhuru at their enduring best, passing the torch even as their flame continues to burn strong, in alignment with the LAW Records mission of discovering and developing a new generation of emerging reggae artists, while simultaneously tracing a living historical connection between the genre’s future and its legendary Jamaican roots.  Owned and operated by the prolific artist/entrepreneurs of reggae-rock band Pepper (Yesod Williams, Kaleo Wassman, and Bret Bollinger),SoCal independent label LAW Records has gained a well-earned reputation as the tastemaker label when it comes to American reggae and reggae-rock. As trailblazers and the unofficial ambassadors of a music scene they are largely responsible for creating, the LAW team has been equally invested in developing the next generation of reggae-rock artists and connecting the genre’s wide-open future with its legendary Jamaican roots.

“Strategically,” says LAW General Manager Paul Milbury, “what we want to do is connect the burgeoning American-Cali reggae scene back to the original legends, who helped create the scene that inspired this one: Black Uhuru is foremost among those legends. We really want to introduce the old to the new and the new to the old, to ensure the newer generation of reggae fans are aware of the legends and their importance, and hopefully introduce the older reggae fans to some newer artists who are pushing the contemporary reggae scene forward.”

From humble beginnings in Kingston, Jamaica’s Waterhouse District, Black Uhuru took their reggae across the globe and won the unsurprising honor of becoming the best-selling reggae act in history — second only to Bob Marley and the Wailers. Black Uhuru toured with the Rolling Stones and the Police, then bust down the barriers all on their own, barriers that have too often kept reggae stars out of the American mainstream. Several of their albums sold tens of millions of copies, including the GRAMMY-winning Anthem. The BBC called them “THE name to drop.”

In 2018, Black Uhuru returned to the studio for the first time in 15 years to record a new album. As The World Turns. Featuring original songs and strong cameos, it was one of the first times in years Duckie Simpson, iconic founder of the band, had stepped out in front again. To support the album, the band headed out on an East Coast US Tour with stops in major cities New York, Washington DC, Philadelphia, & Boston, which culminated in the band’s appearance on NPR’s Tiny Desk Concerts.

Not long after, Black Uhuru was approached by LAW Records: “Teaming up our label with Black Uhuru is mind-blowing,” says LAW Records founding partner Yesod Williams, “like to the point where it doesn’t even seem real. This is arguably the most legendary name in reggae, a band whose music helped shape me, my band, and the whole state of Hawaii in the 80s and 90s where we grew up.  As I approach this from my fandom perspective, I’m in complete awe. When I approach this from the perspective of LAW, ‘none will escape’. The task at hand is to reinvigorate the world with the Mighty BU, and we won’t stop till Duckie’s magic on “Jamaica To Here” is heard across the world, from now till forever!”

Black Uhuru was one of the first bands to seriously incorporate dub elements into their songs, with its undulating, up-front bass lines, and this single tips the hat to this approach. After spending five decades making music, Black Uhuru still manages to maintain their signature sound, keeping everything on tape, old-school:

“Everything was old-school analog,” says Simpson. The basic tracks were recorded at Helltown Studios in Helltown, California, with both Duckie and Dylan Seid on lead vocals. Then Simpson took the recordings to Leebert Cougar Studio in Kingston, Jamaica to do overdubs and mix in backing vocals by Niki Burt and Elsa Green, guitars by Leebert “Gibby'' Morrison, horns by Everald Ray, and drums by Rolando Alphanso Wilson.

Most of the early production was done by Duckie and Horace “King Hopeton” Campbell of Double Lion Studio (who also played keyboards on the album and is featured on the track Gal Next Door) then the tracks were sent off to be mixed by Grammy-winning producer Jermaine Forde of Ajang Music. Robert Oyugi of Ujama Designs oversaw the process as Project Manager and Artistic Director, while Dylan Seid, Dharma LaRocca & Kopavi Cannon were the Executive Producers.

“Fifty years is a big achievement for any band, and we are so proud to be a part of Black Uhuru’s 50th-anniversary celebration,” says Yesod Williams of LAW Records, “We firmly believe in the magic of music at LAW and honoring where it came from. And in our mission here, we are gonna make sure it is known how integral Black Uhuru has been to modern reggae, Cali Reggae, alternative reggae, and just music in general. We are living i a  “Brand New Day” and this album is the perfect beacon to bring us back together in love.”
The “Brand New Day” single will be out March 18th on LAW Records and available on all major streaming platforms. The full LP New Day is scheduled for release on May 13, 2022, also on LAW Records.

“Whether the fans were new to their music, like me, or decades-old die-hard fans, everyone was grooving. ... The music brought the funk, but the theme of the night was clear: we are to love and look out for one another. I was impressed by the musicianship as well as the uplifting message. Black Uhuru was not a show to miss!” — KEXP